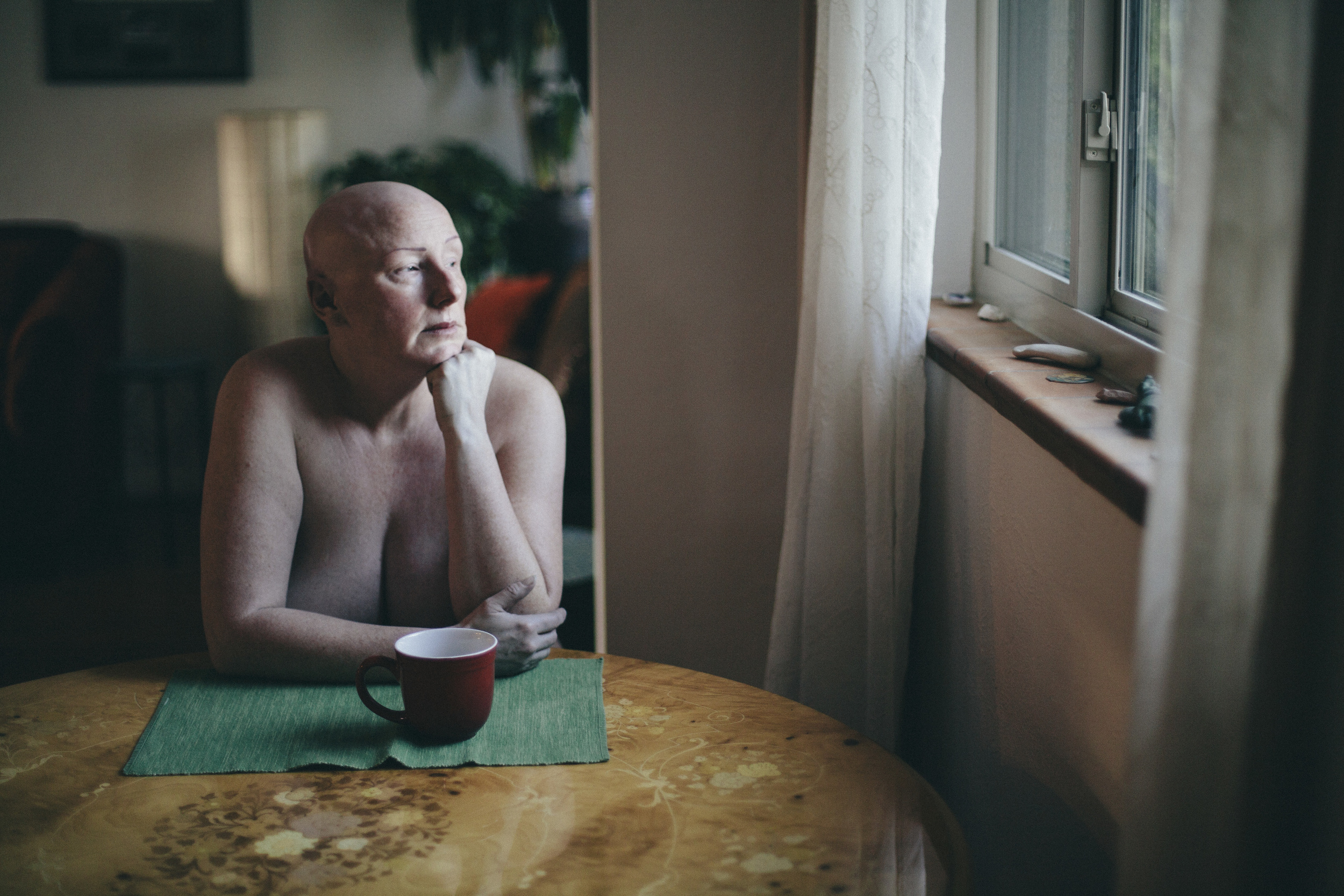 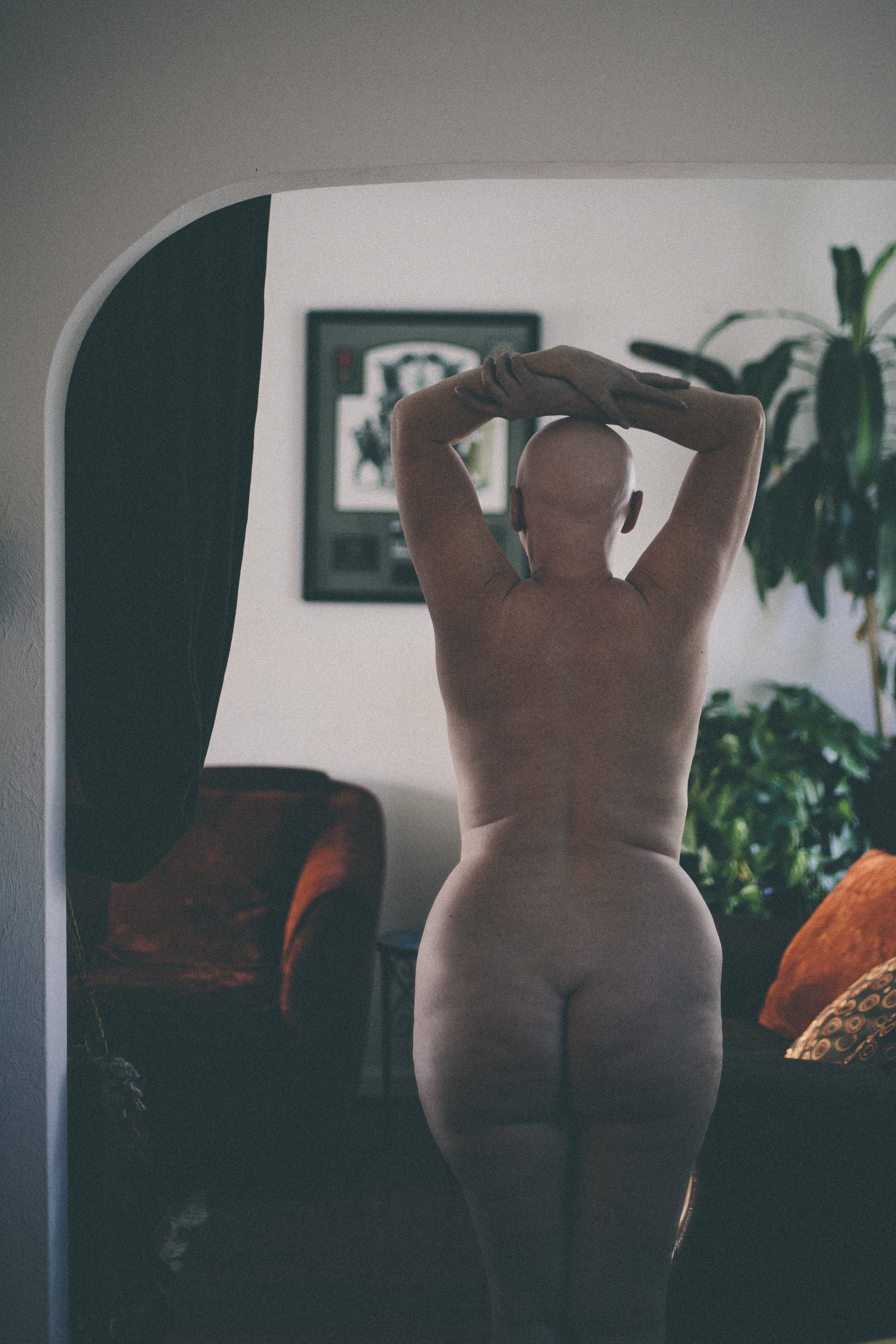 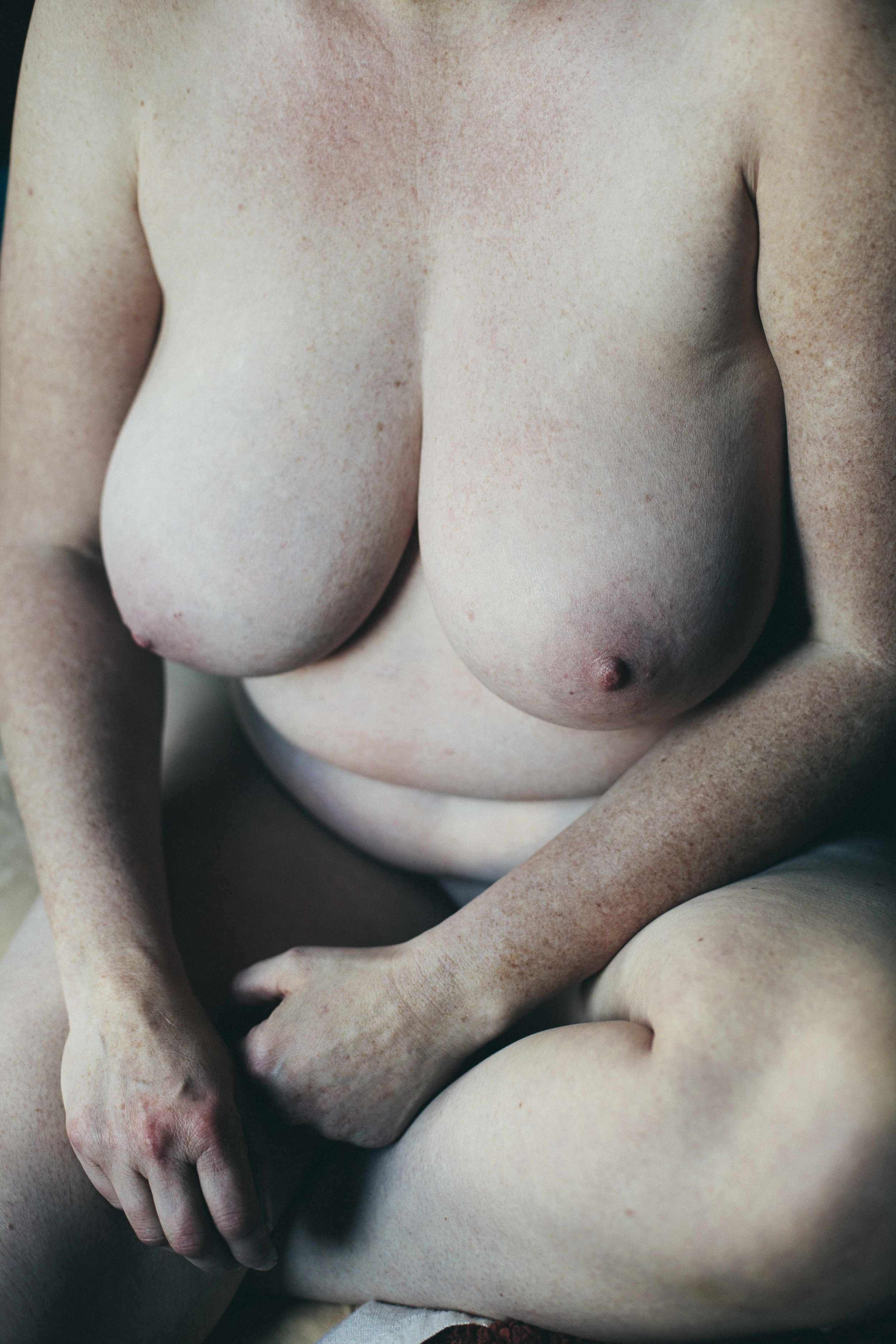 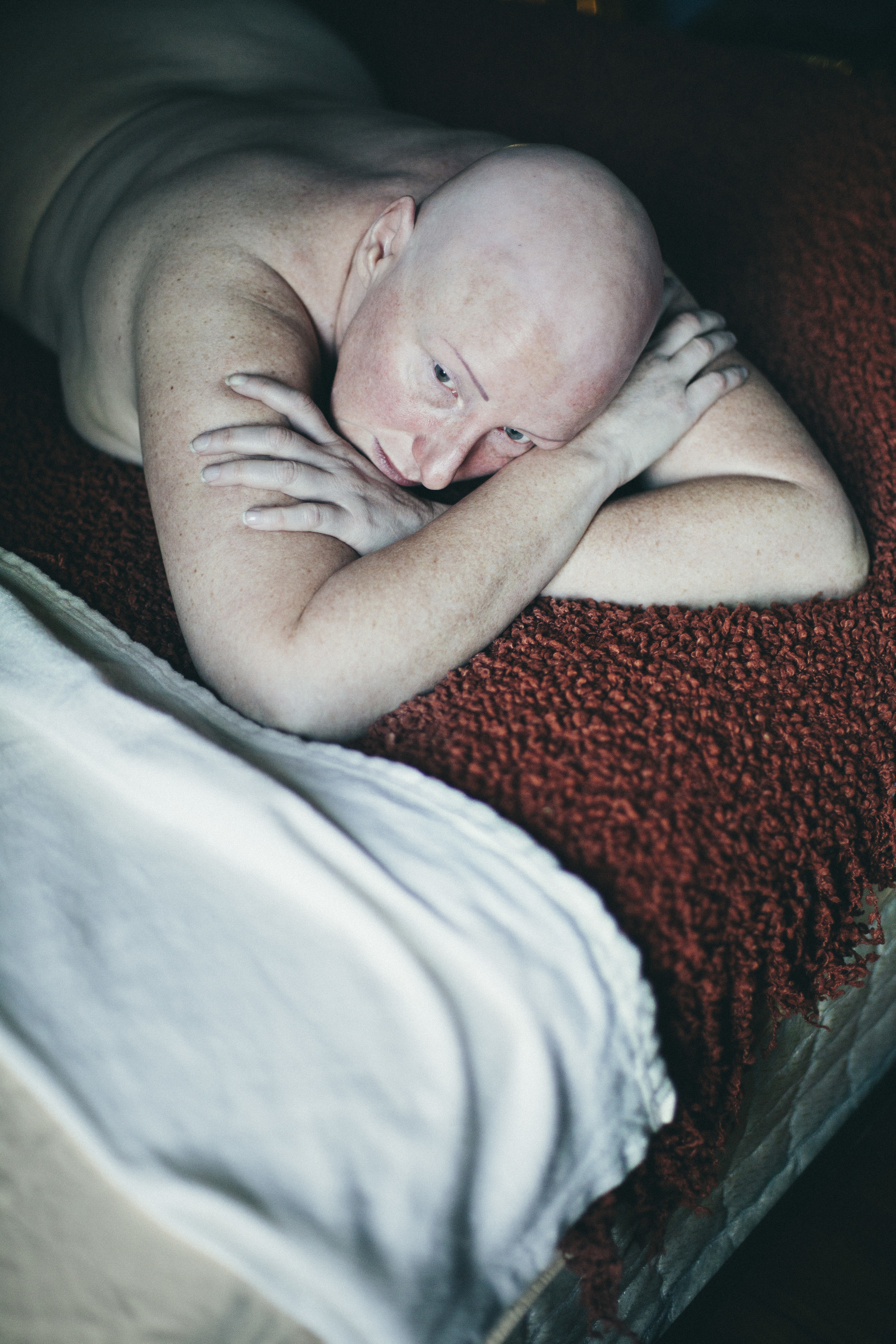 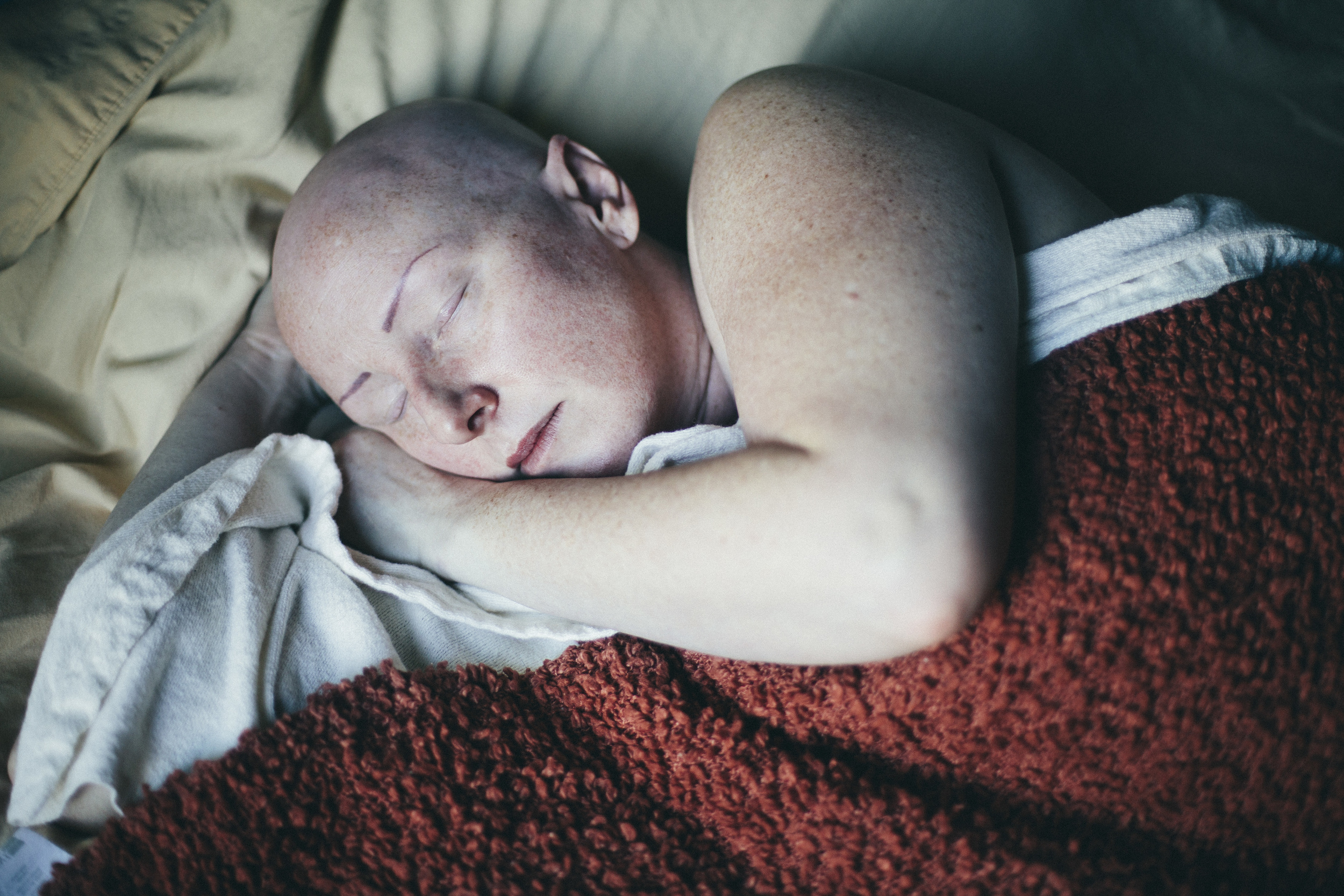 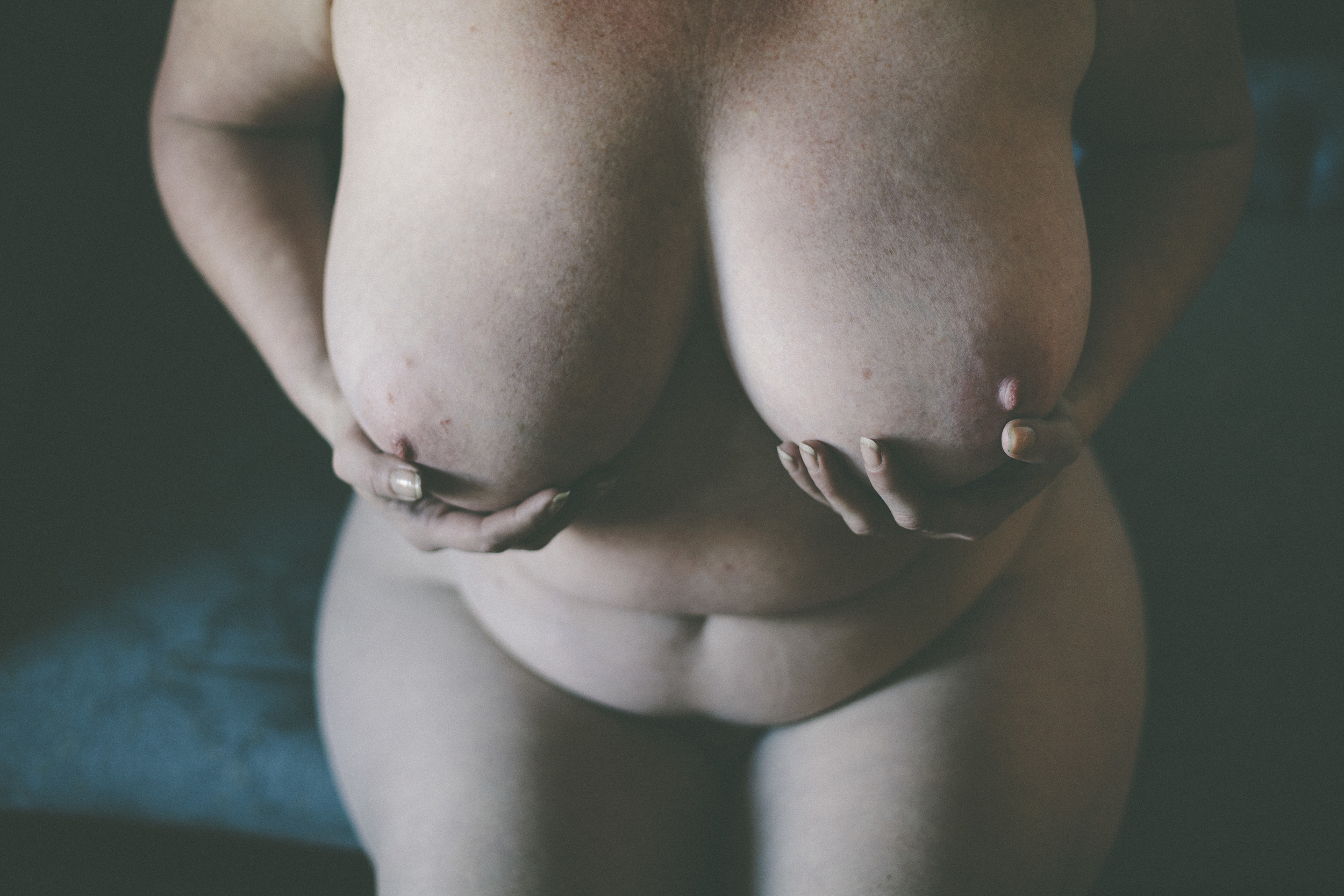 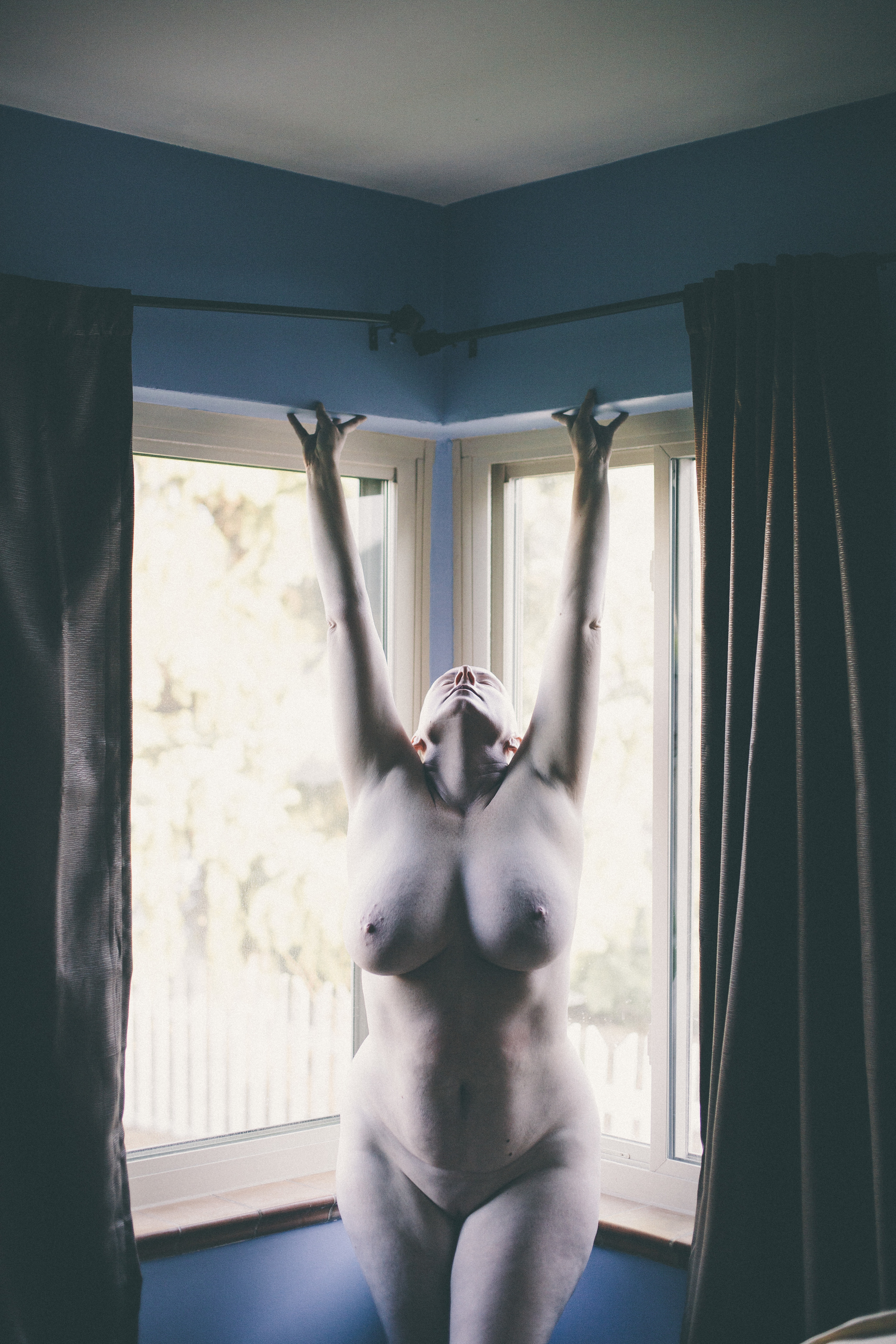 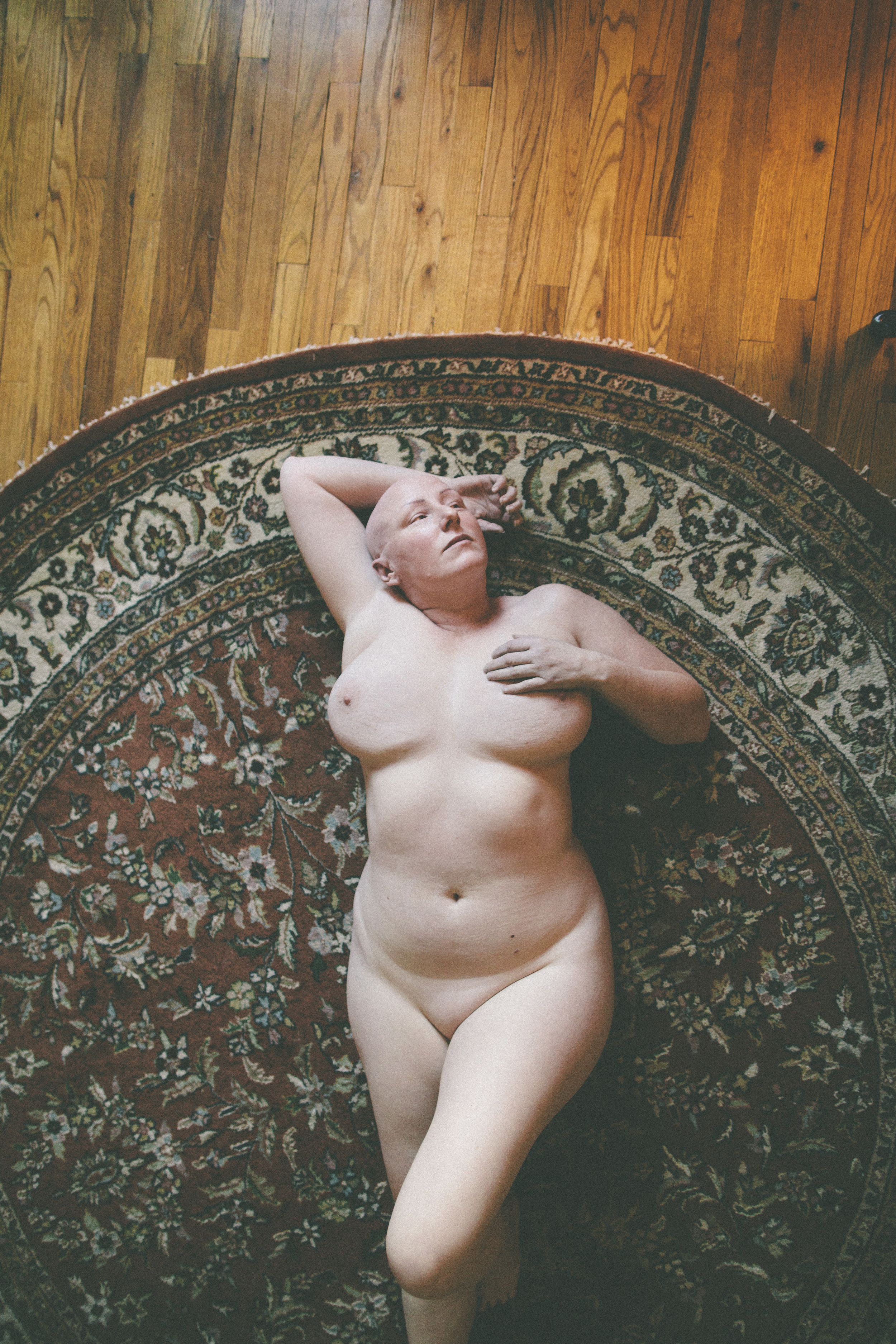 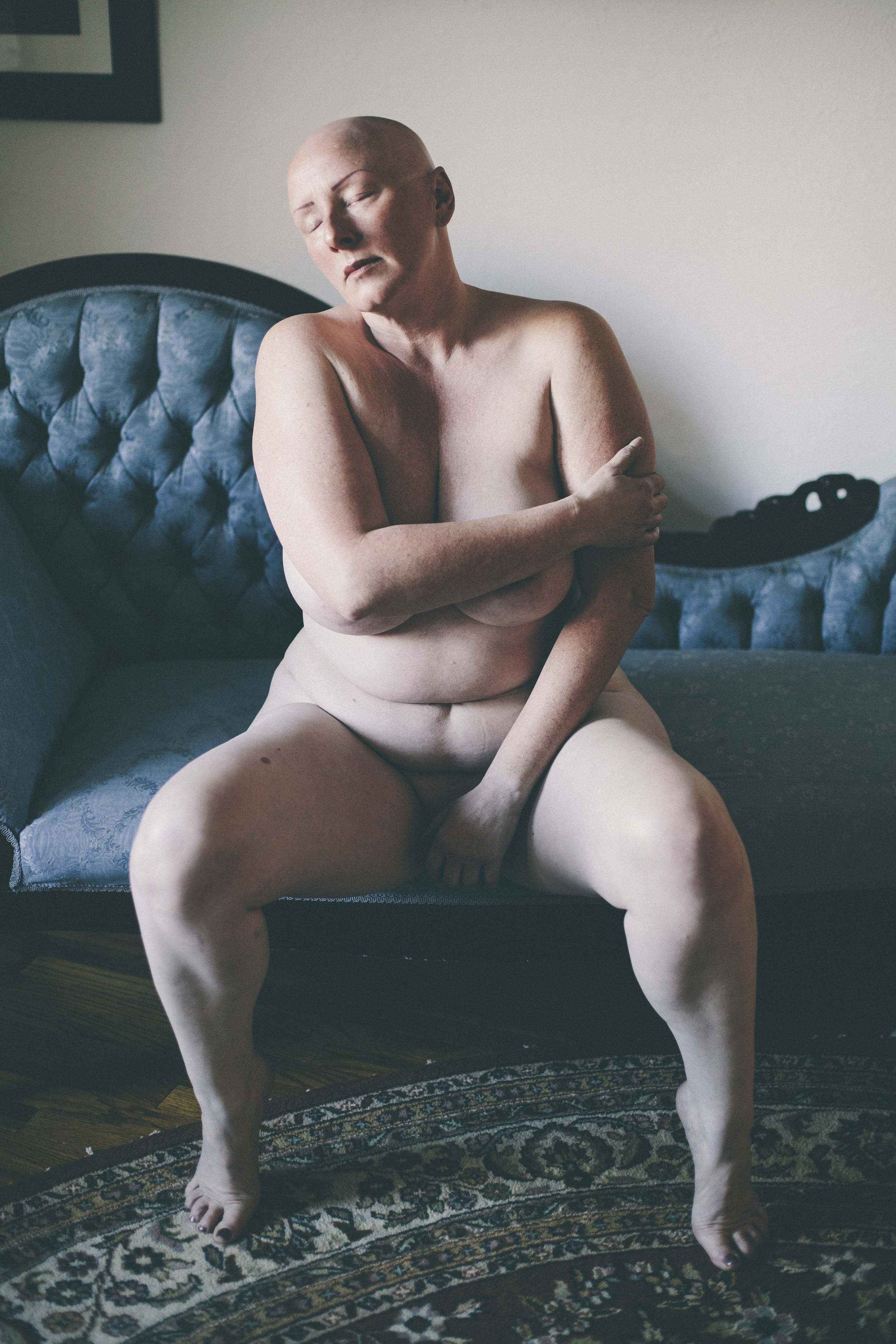 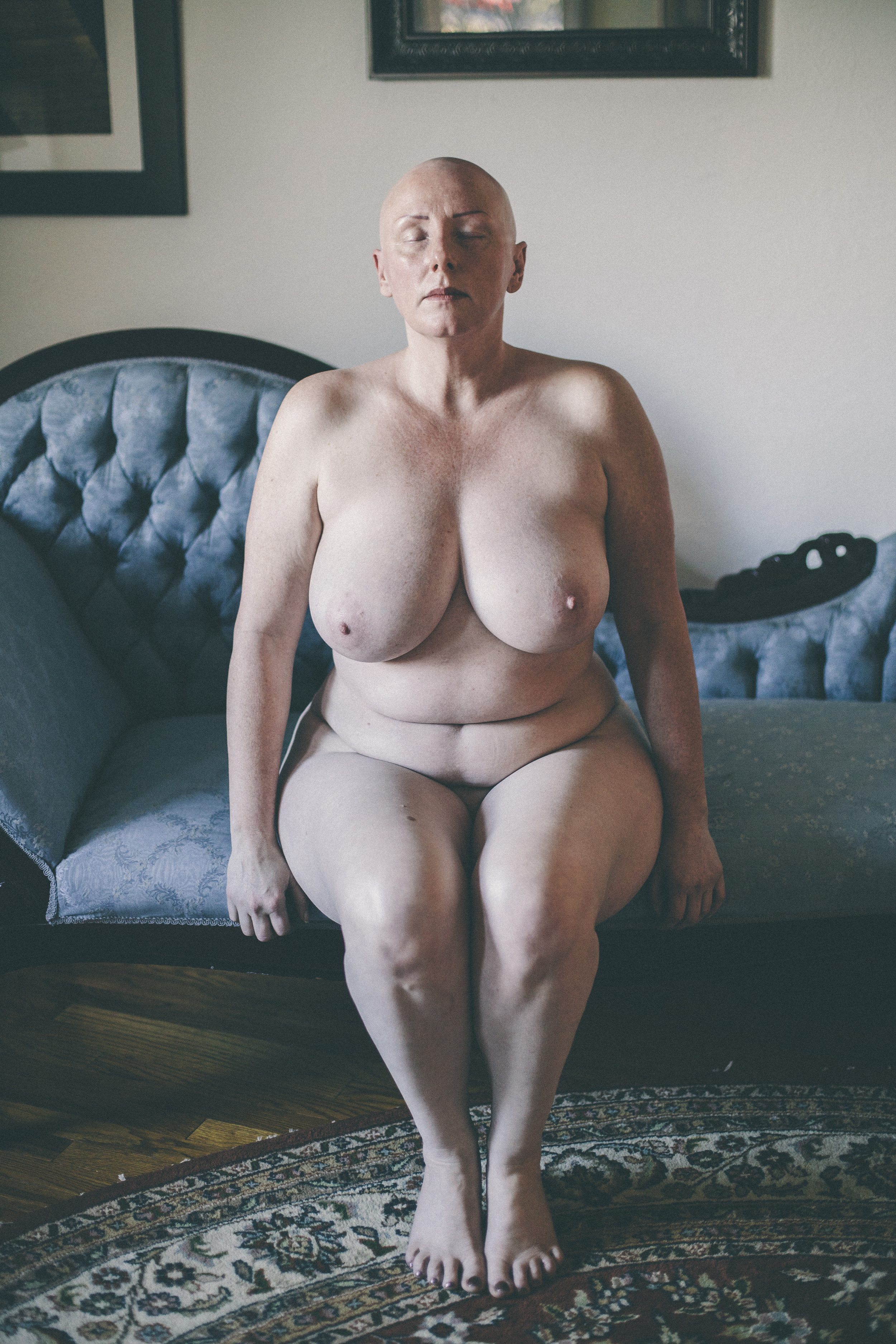 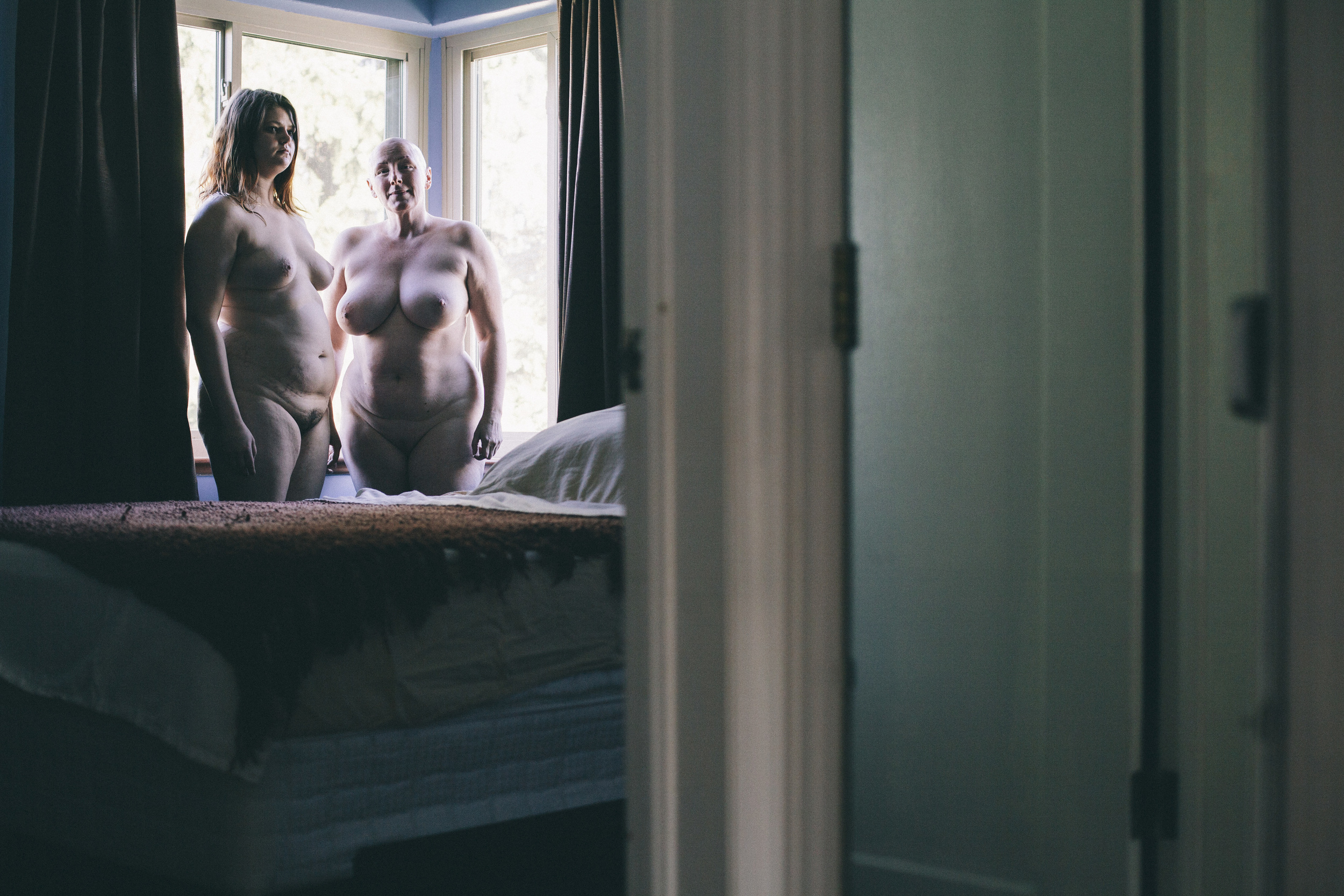 How would you rate your self-esteem from 1-10?
Self-esteem, that’s a complicated one. Six.

What goes into that rating?
I have a comfort level with myself but I’ve also had some significant physical changes over the last five years with health issues primarily. Health reasons primarily that resulted in my hair falling out everywhere. Alopecia Universal is more attractive than Alopecia Delacticus.

Are you nervous? If so, why?
I am nervous. Because I am still not used to seeing myself without hair. I am not used to seeing myself larger than I was for most of my life. The medications that I took caused me, for several years, to gain a lot of wait because I wasn’t gaining a lot of weight from my celiac disease. I did not get nutrients in my system for many years because celiac disease is a gluten sensitivity that kills off the Villi, which absorb nutrients from food.

The weight from the steroid shots in my scalp to help my hair grow back has not come off. The shape of my face is very different, because of the weight and my hair loss. My eyebrows are tatted on, and are a different shape than they naturally are. And without a hairline, my face just keeps going all the way to the back.

How do you think this shoot will effect you as a person and your self-esteem?
I think I will dislike seeing photos of myself naked, however, from seeing photos that you’ve taken of women at various stages of their life, I know you are capable of seeing beauty where others might not. I feel a bit like a blank because I have no facial hair and other than my eyebrows no ink. I feel naked most of the time because people use their hair to hide their face and to display personality traits. People can tell when they look at you, and see hair, they can tell what kind of social person you are most times. There is so much people can tell about you by having hair, and I feel a bit anonymous. I am curious what you will be able to see in that without camouflaging me in makeup or clothing.

People look at me differently based on whether or not I’m dressed femme. When I am dressed in jeans and no makeup, people assume I am a butch dyke and are much more hostile. When I am more fem in appearance, people assume I have cancer and are more solicitous and condescending. My people are like, “Alopecia or Cancer?!” I am doing this for other people who identify with me. I want to give people courage, I want to take the hits so other people will see they can survive them. And being thoroughly naked, knowing many people will see me fully naked, is not an easy thing to do.

Tell me a little about yourself.
Military brat, born in Germany. The oldest of many children. Both from different marriages and because any continent my Dad has ever been on he has left children behind. I have found out three years ago that my Mother’s side of the family are Irish Jews. I am an atheist and have no interest in the religious part but the cultural part has always fascinated me.

What is your favorite body part?
I have never really thought of that. I like my teeth. I like my teeth because there are two on the bottom that are at almost right angles at others, when I bite into things it leaves a pattern that almost looks like an EKG pattern.

What injustices have you faced as a sex worker?
I have received poor quality medical care from a doctor, who prescribed injections for my scalp, when I complained about the intense pain. My pain tolerance is extremely high from having migraines from birth. She laughed and never told me that there were topical analgesics that would have made injections less painful for five years. I felt she was punishing me, that she found it amusing. I did keep talking to her about the pain and when I told her I was gaining a lot of weight from the steroids, which is typical with steroids, she told me to eat less and exercise more and did not tell me I could sustain systemic damage from years of steroid use.

What is the worst client interaction you’ve ever encountered?
We had a client begin to tell us about how he abused his wife. He was trying to get us to be more sadistic to him out of anger. He escalated the details of the abuse attempting to disturb and enrage us.

How was your middle school experience?
It was haphazard. In military schools, I was judged more for my brains and ability to adapt. And in civilian schools, I was usually considered geeky because I did not wear the same clothes that the locals did.

How did that effect your self-esteem then?
It was difficult; however it taught me that who I am is a constant and what other people think of me will always vary and it was always bout them and not me.

It gives me a more solid sense of self. What level is your self-esteem at right now?
I think still around a six.

Are you a feminist? Why?
Yes. It’s just the radical notion that women are people. Ruth Bader, the notorious RBG, was asked when there would be enough supreme court justices and she said, “When there are nine. No one ever kicked up a fuss about there being nine male justices.” Or something along those lines. I also love Dorothy Parker quotes. She was radical in her own way in her time. Her wit was astounding.

What is the biggest feminist issue today?
Raising girls to think that their primary value is in their appearance. That sets them up for a lifetime of thinking their highest achievement is thinking they need to be as pretty as possible rather than raising them to believe in their physical strengths or leadership abilities or artistry or intellect.

How has the hairlessness affected your self-esteem?
It’s had a very deleterious effect on my self-esteem. I am still adapting or adjusting. One positive and unexpected result is that I am more recognizable now and people who have seen me on televisions and at events as a performer remember me much better than when I had hair and looked more generic.

So it’s been positive in some way then?
There have been more positives. I like to do fire performances where I light me head on fire in various ways. I can do fire mohwaks with four foot flames. I was photographed in Bizarre magazine in 2011 with a fire mohawk and the Discovery channel also featured my crew and the fire play that we do.

How do people treat you differently in public?
Whenever little kids stare at me I’ll put a saltshaker on my head and they’ll go, “Dad! Dad!” and I’ll take it off when the Dad looks. And it drives the kids nuts because their Dad won’t believe them. My friend’s strategy is to allow people to underestimate her before she blows them away with her astounding intellect. Which blows them away since she has a southern accent and looks like an ex-stripper. After she reels them in, she’ll prove them wrong. “If they want something to stare at, we will give them something to stare at.” I think that’s an amazing act of compassion on their part and depth of understanding on their part and how people are treated when they look different. I think it’s radical and beautiful. It’s kind of insulting that people doubt how intelligent and articulate sex workers can be.

Is there are message you want to leave with those reading?
Get out of your comfort zone.