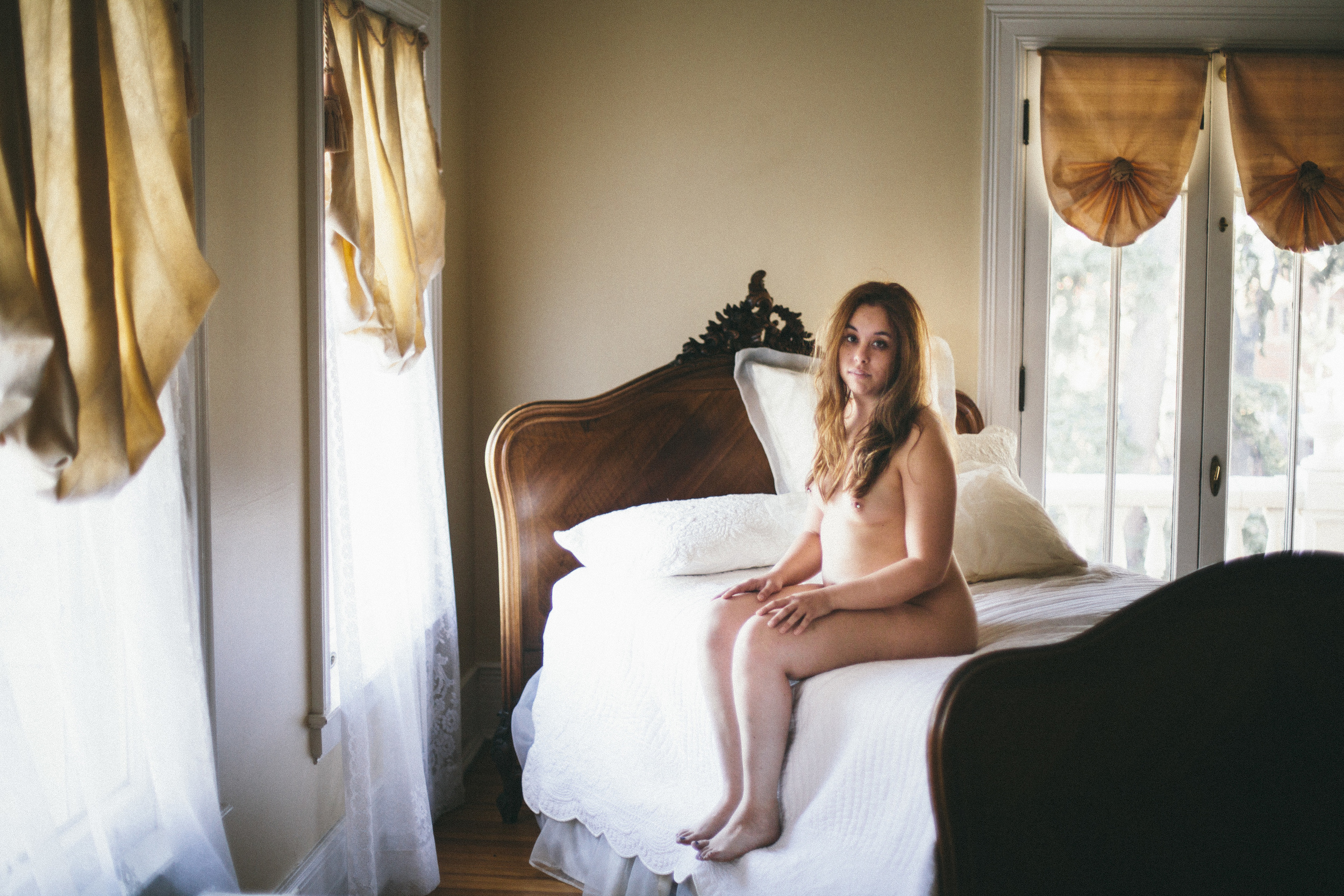 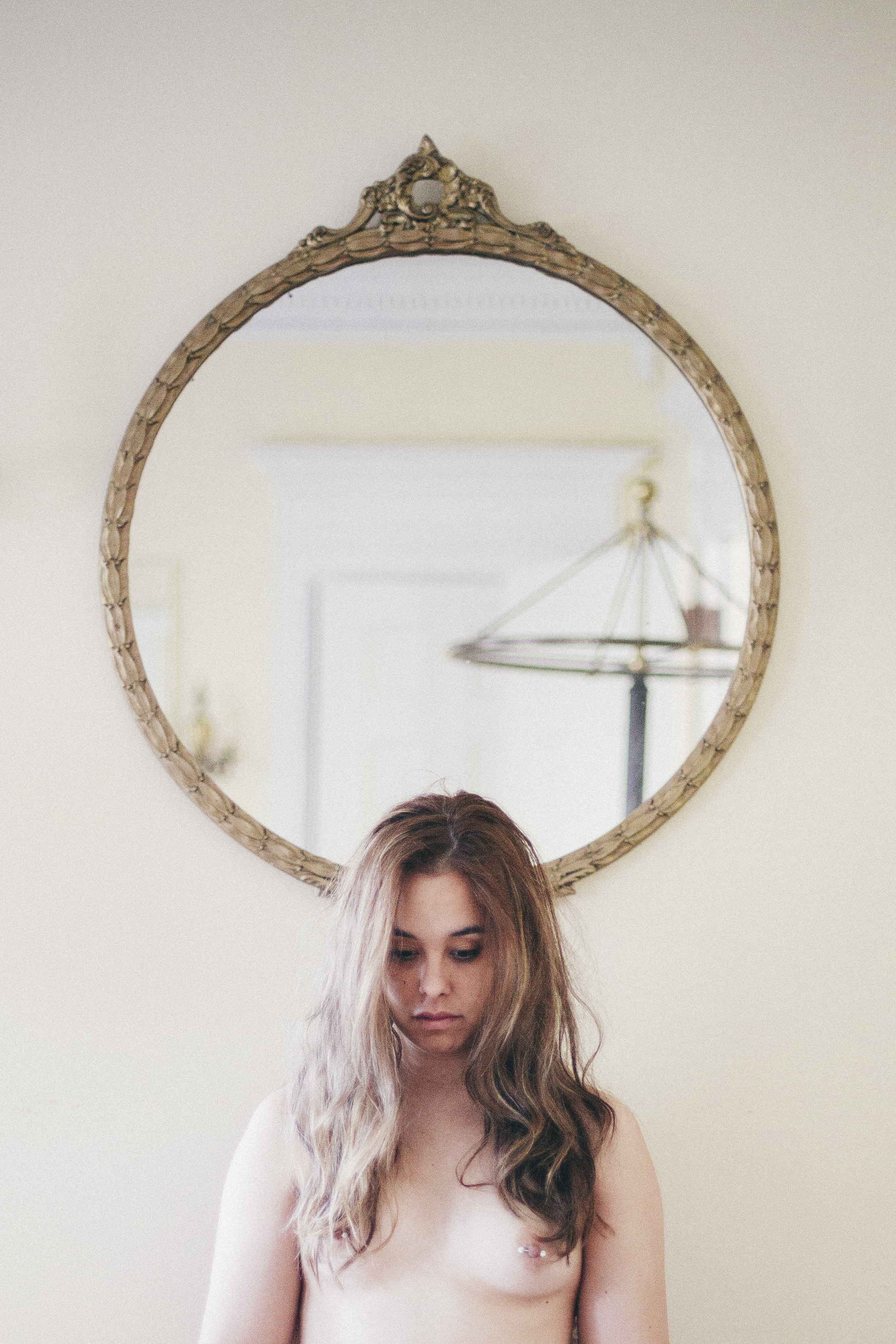 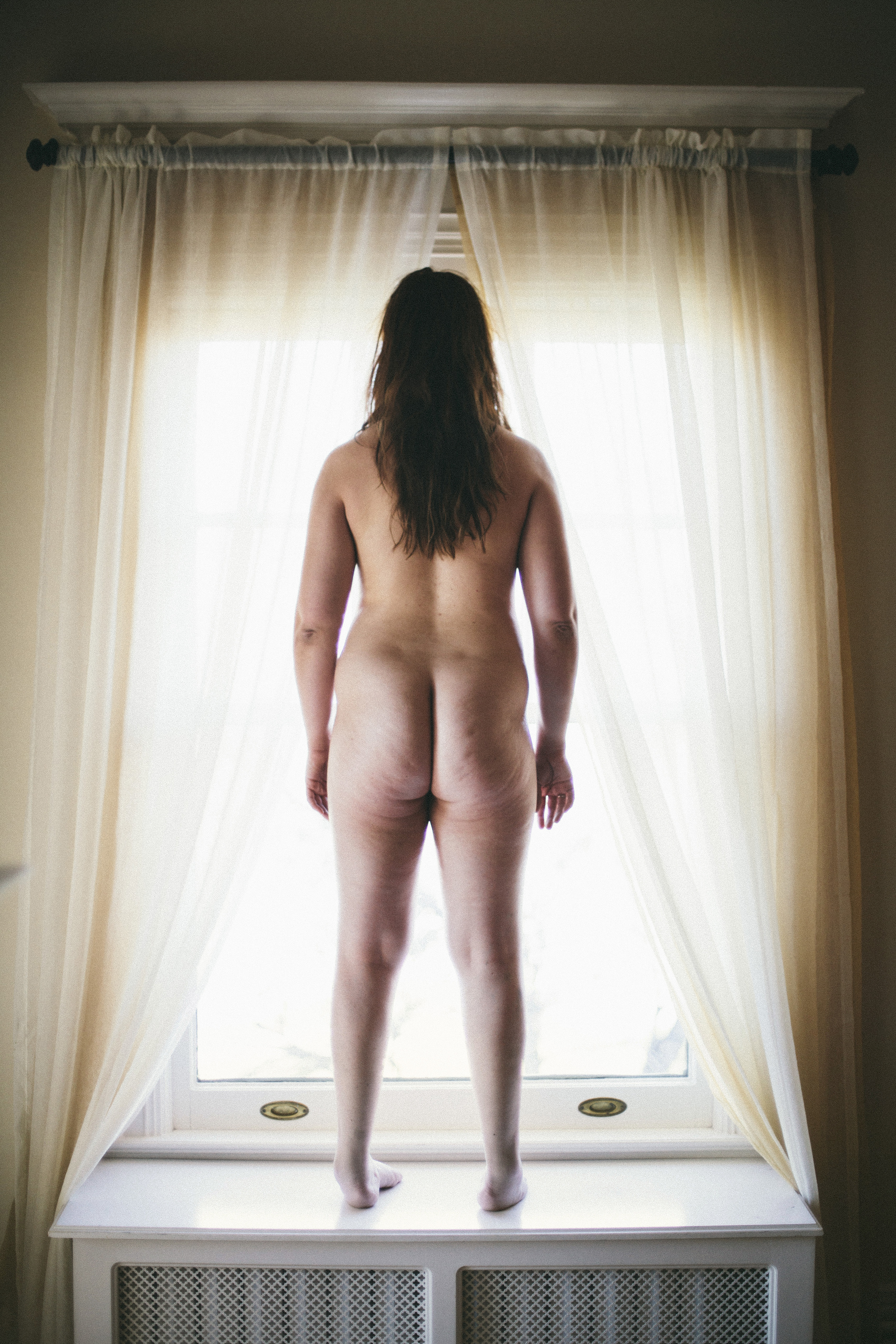 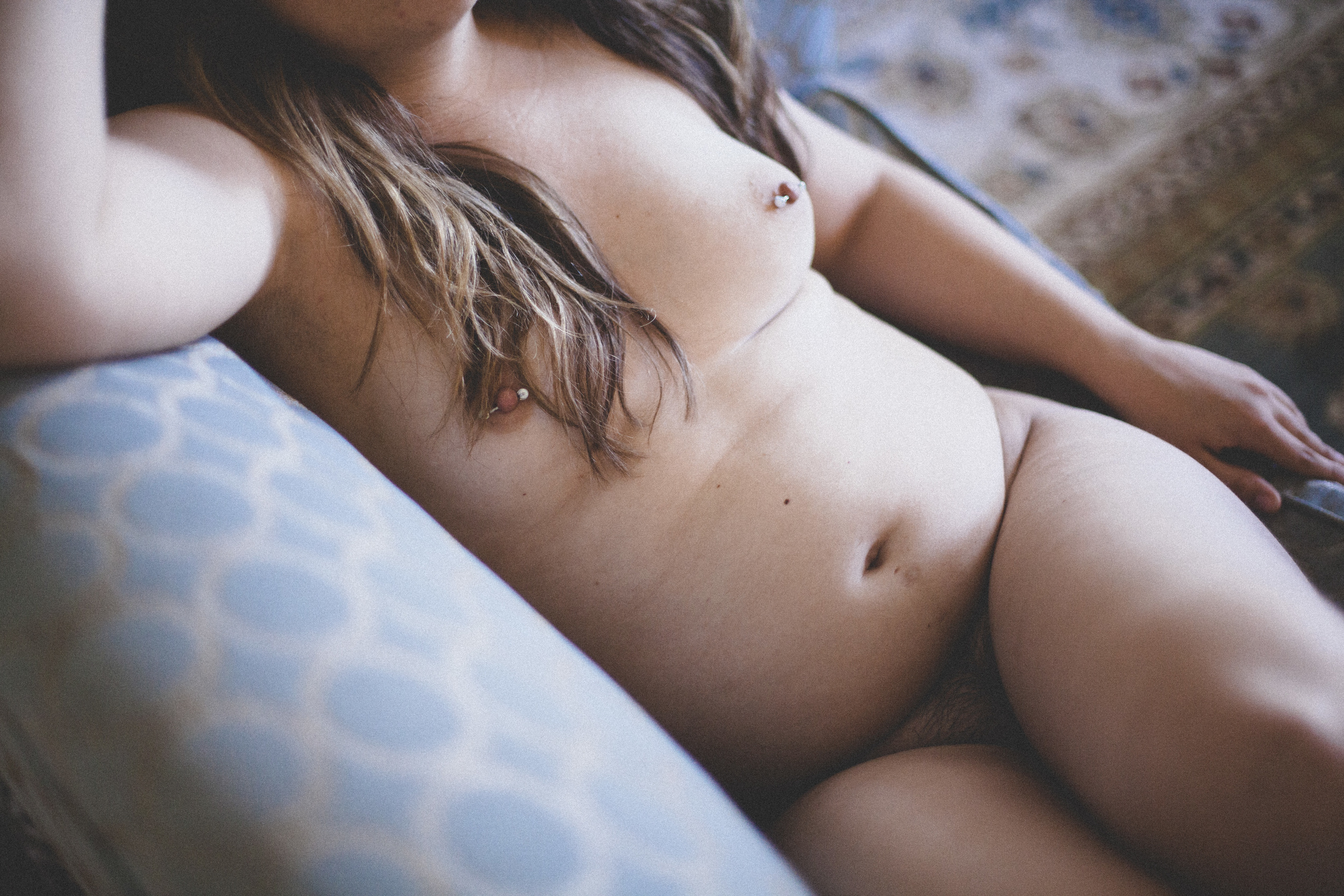 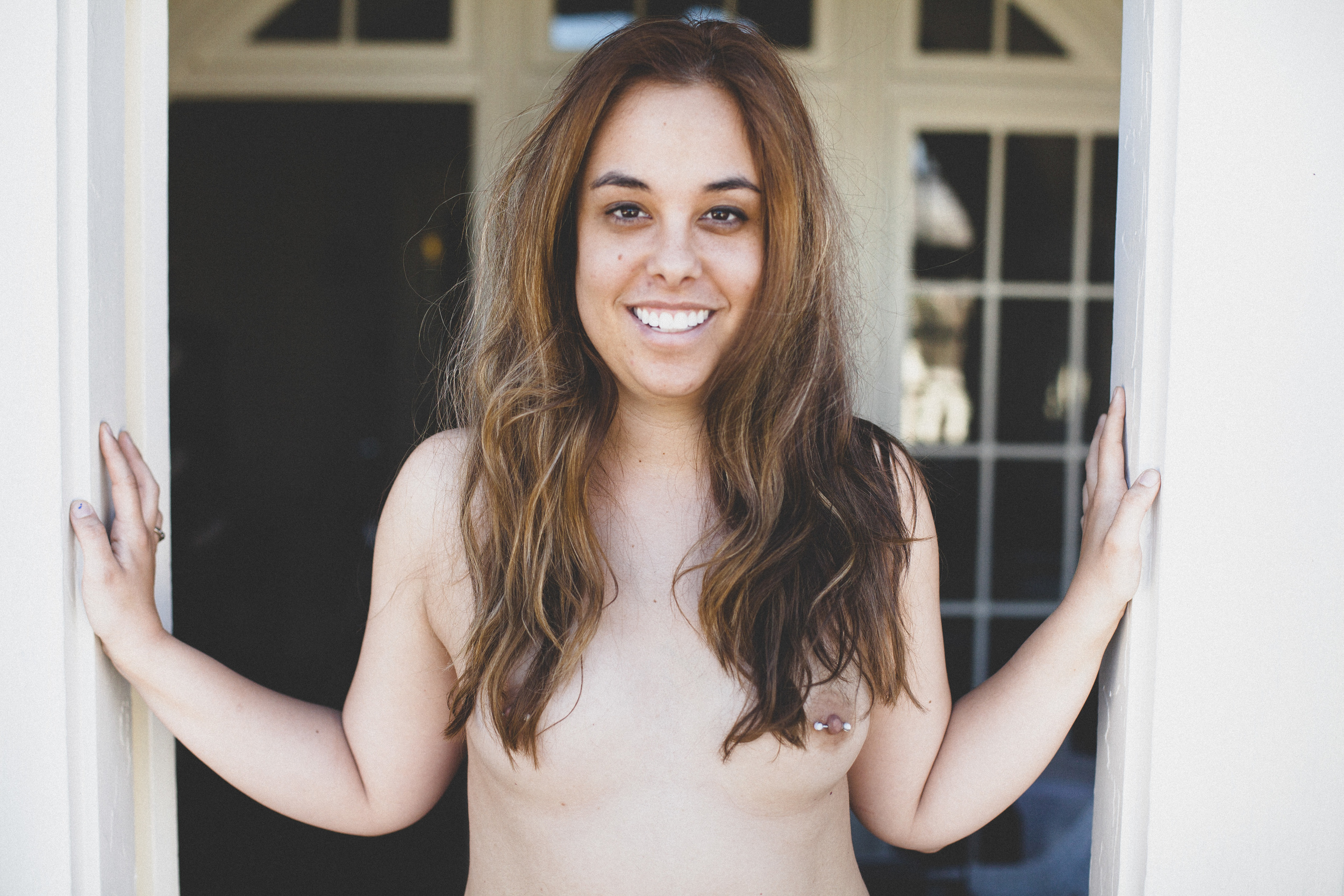 How is your self-esteem right now?
I would say it’s about a six, since I’m just thinking about it so much more. Like, oh man everyone’s going to see this! Haha.

What is your favorite body part? Why?
My smile? It’s my smile. I get a lot of compliments on my teeth, I love the act of smiling and laughing as a comedian.

What is your least favorite body part?
My legs. I have cerebral palsy and they don’t work right. A lot of times, they’re in pain. A lot of times…I’m fighting to get my legs to talk to my brain. When I see myself move; it makes me cringe. I can feel like a million dollars in the moment but then I see the video. I look a little bit pathetic, and I’m limping. I don’t know how people see me. I put my own judgment on it. Even if I see someone with a disability, I think “Poor them, oh that sucks..”

Tell the biggest struggle you have with your body image.
With my disability, feeling sexy is really hard, feeling like I would ever be desirable to somebody is…especially if I see a picture of myself. Have other people seen me? I have a few times where I’ll look really good and I’ll trip and I’ll fall and it’s just a reminder on that even on a good day I have a disability. Even if I look really nice, I have a hard time believing they’ll notice anything but my disability anyways.

Let’s talk about sexy. What is sexy to you?
I think it’s sexy when you move with confidence and control the room. I can’t wear heels, so I have so much envy for women who wear heels. Everytime shes walking down the street in her heals and you hear the click clik I feel like, “Yeah she’s a bad bitch. She’s in charge.”

So a lot of it is just owning who you are and taking control of your body?
Yes.

And what about that do you struggle with yourself?
I don’t have control of my body all the time. I can’t move in a confident way, sometimes even just taking a few steps is tough depending on the terrain and stuff. It’s hard to have that confidence in itself. That’s why I do stand up. If I’m in a situation with people who don’t know I’m comedian or haven’t heard it I’m a lot quieter and intimidated. People don’t talk to me, they’re not forth coming in a situation. As soon as I have that time on stage to show people who I am, we both feel more comfortable. I can’t imagine not living a life with a tool like that. I know most people don’t, and I think that’s fascinating to me.

When I was in middle school I had horrible social anxiety. I would throw up, fart everywhere from nervous gas, and it was just wretched. But photography helped me get to know people, to have a talent. And when I’m in a room with people who don’t know me now, instead of farting like a goon I’m waiting for them to challenge me because I’m confident in myself now.
It’s actually just hardest to be myself with my family because when I sit with them and I know they haven’t see me do this thing that I love, I feel like they don’t even really know me.

Yes, the hardest part about having a passion is when your family doesn’t feel as excited as you do about it.
Mhm. I still get a poor Christie vibe from them. I’ve had friends meet my family, and they think, “They don’t even know who you are.”

Let’s talk about feminism. Are you a feminist? If so, why?
I would say no before the project. But doing this project, has changed things. I’m turning into one a little bit. Women in comedy, just talking about the things we can make funny is really interesting to me. I was listening to NPR yesterday and they were talking about a one minute clip on Bojack Horseman and a bit had a woman drooling and the writers were saying to the woman who wrote the bit that she can’t do that because it’s not funny if a woman is drooling. That if a woman is doing it, it would slow the joke down. I thought, no! That’s bullshit! The joke has nothing to do with gender. Because it’s a cartoon woman, and not a man, it’s not funny anymore?

Women are so often not allowed or seen as the funny person in the room.
No, they’re not. And if they do say something important then people become uncomfortbale. Most female comedians talk about their body and their relationship with men and it’s hard to get away from that because that’s what people expect and want to hear from you.

It’s not funny, unless your the butt end of the joke.
Yes. But you can’t talk about your vagina. I know some women who do it and they get a lot of shit for it.

But a man can make jokes about his boners and his penis. That’s always funny.
Dick jokes are totally fine.

It’s funny that we don’t have the social privilege to even make fun of our own bodies as a whole.
No. When I started doing stand up, a lot of my stand up is self-deprecating. A male comedian I was dating told me, “People don’t want to listen to a female make fun of herself. They just feel sorry for you.”

How has this project changed they way you see yourself?
It’s just given me more pride in what I’m doing. I realize how lucky I am to have a platform that I have. It’s almost feeling like I have more of a social responsibility because I have that microphone in my hand. It’s been very cool because like stand up, you’re using the pictures to control the conversation about your body. It’s a powerful thing.

Any last message you want to leave with the readers?
Search for your own way to control the conversation about your body. People don’t get to control it, you do.